Trouble Breathing Through Your Nose? It could be Nasal Airway Obstruction 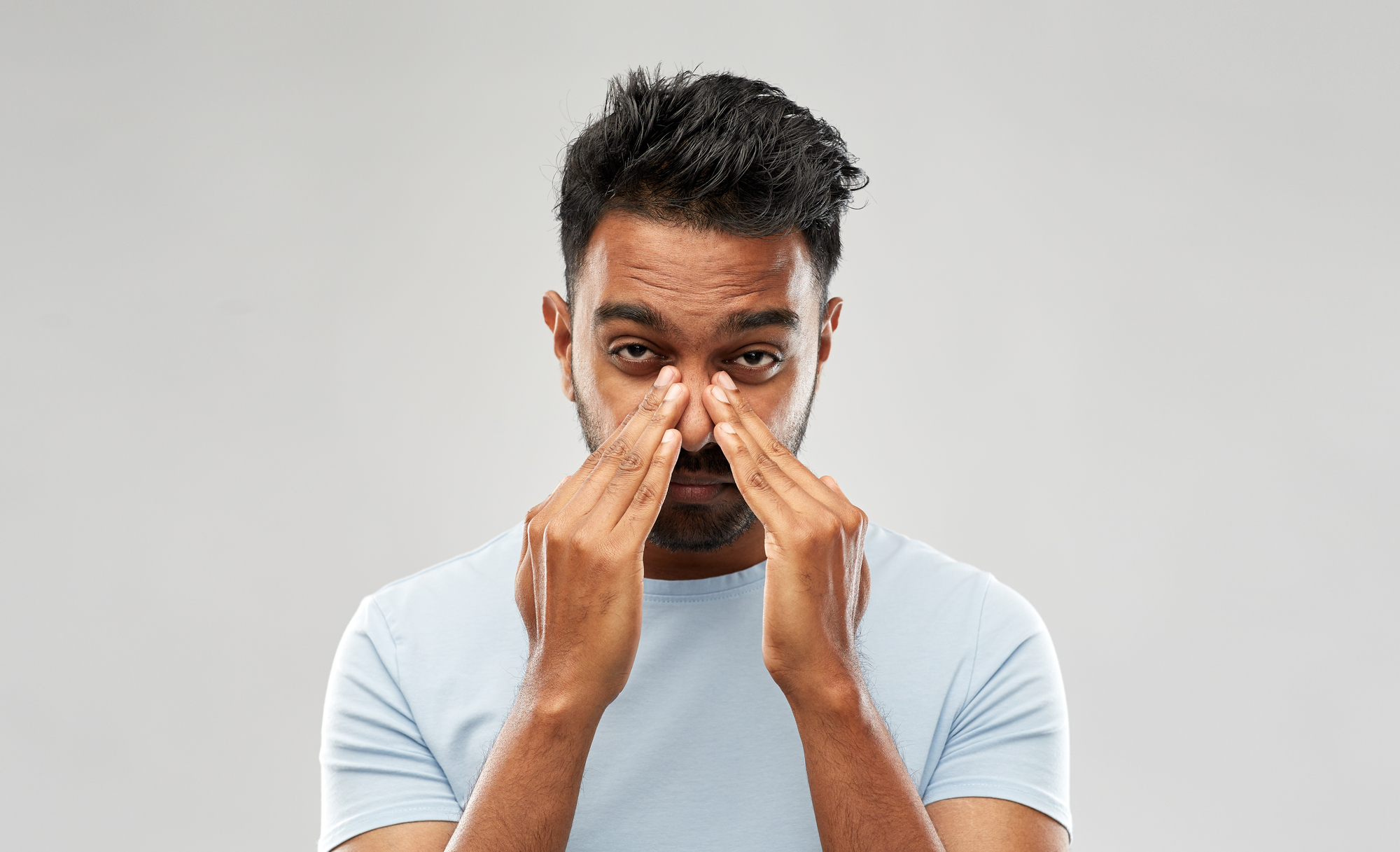 Trouble breathing through your nose? When our patients come in with this complaint, they’re likely dealing with a blockage in the nose, also known as nasal airway obstruction. This blockage prevents air from flowing smoothly through the nose.

Nasal blockage is not only frustrating, it can also be problematic. Humans are essentially meant to be nasal breathers. The nose is designed to humidify and warm air, so it’s more comfortable to breathe through your nose. When you can’t, it’s uncomfortable. Plus, it can lead to a dry mouth or sore throat.

Interestingly enough, studies even show improved memory when breathing through the nose. Apparently, the proximity of oxygen to the brain is helpful to cognitive function.

If you have trouble breathing through your nose, it’s time to find a solution. Nasal obstruction symptoms come from four main areas of the nose. If you’re experiencing nasal airway obstruction, here’s what may be causing it and what you can do about it.

The mucosa is the lining on the side of the nose that covers the entire interior surface of the nose. Think of it like the skin on the inside. When the lining becomes inflamed, it obstructs the nose and produces more mucus. This issue commonly presents as allergic rhinitis with symptoms of a stuffy, itchy, runny nose — that’s an inflamed lining.

Many patients with a mucosa issue regularly use nasal decongestant sprays like Afrin. We actually do not recommend this type of nasal medication. When people overuse a decongestant spray, their nose becomes more congested than it was before, and they develop a condition called rhinitis medicamentosa. Basically, it’s an addiction to Afrin.

When we begin treatment for a problem with the mucosa, we first recommend patients stop using nasal decongestant sprays. Then, we begin medication.

When treating nasal obstruction symptoms, we always try medical treatment before exploring surgery or procedures. Mucosa problems are medically treated, so for patients struggling to breathe through the nose, we begin here.

We start with topical sprays, using a combination of nasal steroids (Nasonex, Flonase, Rhinocort, or QNASL) and topical antihistamine sprays (Azelastine or Patanase). We can also consider recommending an oral antihistamine such as Claritin, Zyrtec, or Allegra. We try combinations of these products for about a month.

For some people, medication solves their breathing problems. But for others who still struggle to breathe through their nose, we explore the other structures that may be causing the problem.

We have three kinds of turbinates: superior, middle, and inferior. The inferior turbinates increase the surface area of the nose which allows air to be more hydrated, humidified, and warmed before it enters the lungs. But when these inferior turbinates become enlarged, they can cause nasal airway obstruction.

These structures can dynamically change in size by the hour. Many people complain that one side of their nose is stuffed up, then the other, especially when they try to sleep. This happens because the inferior turbinates have a potential space in them that fills with fluid. Gravity pulls fluid into the open space. This leads to dynamic congestion that gets worse with a sinus infection, allergy flare-up, or when laying down.

If inferior turbinates are the root of the issue, we can perform a turbinate reduction. We conduct this simple procedure in the clinic in less than 30 minutes. The goal of a turbinate reduction is to reduce the inflammatory tissue. We go under the surface, suction the tissue out, and move the turbinate over to create more space. It’s kind of like liposuction for the turbinate. We take out the volume so there’s more space in the nose.

A turbinate reduction is quick and well-tolerated. Plus, recovery time is minimal. Most patients have a slight nose bleed for up to 24 hours and congestion for about a week. This non-invasive and long-lasting procedure provides a highly effective solution for those with turbinate issues.

The nostril (outside of the nose) is medically known as the nasal valve. For some patients, this collapses when they take a deep breath in. When exercising or trying to inhale deeply, they’ll feel like they just can’t get enough air into their nose.

Patients can self-identify a likely nasal valve collapse by looking in a mirror when they inhale and seeing if the outside of the nose collapses in. Also, if patients find breathing becomes easier when using nasal breathing strips, it implies there may be a nasal value issue causing the problem.

To treat nasal valve collapse, we now use a treatment called Vivaer to remodel the nasal tissue. We insert a small probe under the surface of the nostril, open the nostril, and heat the tissue strategically. As it cools, we can change the position of the tissue by a few millimeters, which can mean a significant improvement in breathing. Also, it stiffens the tissue, so it’s less likely to collapse.

If the patient is experiencing problems with both the nasal valve and the turbinates, we can do the Vivaer procedure at the same time as a turbinate reduction.

In the past, we relied on alar batten grafts to resolve nasal valve collapse. In this procedure, we take cartilage from the septum and implant it in the nasal sidewall to hold open the nasal valve, which is a much larger procedure with a longer recovery time. In some cases, this is still necessary, but Vivaer has largely replaced it as a much less invasive alternative.

The wall in the middle of the nose, or nasal septum, is another potential cause for nasal obstruction symptoms. This area is partly cartilage and partly bone. When it’s deviated (pushed to the side), it can create airflow problems.

A deviated septum can be congenital or come from a trauma such as a break or repeated injury to the nose. For many people, this problem worsens with age. Cartilage continually grows, and as it does, it exacerbates the problem.

A deviated septum most often requires a surgical septoplasty. This outpatient procedure takes about one hour and then about a week to recover. We perform most surgeries in an outpatient surgery center under general anesthesia. For minimal septum deviations, we can do operations in the clinic with local anesthesia.

If you’re experiencing nasal obstruction symptoms such as difficulty sleeping, trouble breathing while exercising, or excessive snoring, give us a call. After we clear a nasal airway obstruction, people sleep more soundly, snoring improves, and in general, they just feel better. And who doesn’t want that?